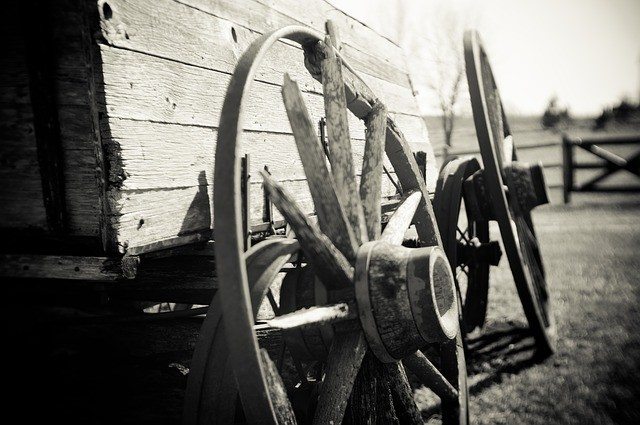 Frazzled factory workers, disenchanted farmers, former soldiers not wanting to return home, new immigrants, dreamers, adventurers and those who yearned to live by their own terms mounted their horses and joined wagon trains for their journey to new opportunities in the Western United States during the latter half of 19th century. Whether seeking riches or a new way to earn a living, these risk-takers often left their comfortable world behind to pursue gold and silver mining, miner supply businesses, ranching, inexpensive farm lands or just the adventure of an unpredictable life.

While many newcomers to the West amassed fortunes and achieved their dreams, not all of these stories had happy endings. Even those who did meet their goals often experienced significant hardship. Health problems, lack of resources, unscrupulous characters, and challenging weather conditions derailed many western dreams. Although personal perseverance was vital to survival, this trait alone often could not sustain these adventurers through difficult times. The ability to form alliances and network with neighbors, acquaintances or other businesses ultimately determined success or simple survival in the Old West. These exchange relationships were early strategic partnerships.

Were the days in the Old West much different from the entrepreneurial world of the 21st century? Many business owners today at one time became frustrated with their jobs in bureaucratic organizations. Or perhaps these new business owners had read one too many Dilbert cartoons. Faced with incremental salary increases, uncertainty over layoffs, or just the desire to make a living in a manner they choose, today’s entrepreneur and yesterday’s cowboy have plenty in common. Vast differences in technology, business conditions and the world are obvious, yet the shared essence of the cowboy and the entrepreneur is achieving dreams through significant risk.

He enjoyed the independence of making a living through prospecting, yet had a strong confidence that he would someday hit the mother lode (land a large mineral strike). Over the following seven years, Ed traveled among many of the west’s gold camps. In 1877, at age 24, Ed arrived in the Arizona territory anticipating another attempt at his elusive mother lode. He quickly gained a reputation as an unlucky fellow, whose continual search for a gold strike often achieved minimal results.

Motivated by stories of unexplored mountains in Southeast Arizona outside of Tucson, Ed headed for the San Pedro Valley in the Huachua Mountains, unimpressed by those who said the only thing that he would find would be his tombstone. The area revealed its danger through many tales of robberies, gunfights and other hostile episodes, which contributed to an image of a forbidding place. Not long after his arrival, Ed began working at the Brunchow Mine as a lookout guard. From his perch, he often gazed off towards Mule Mountain. A geologic upheaval exposed ledges of grey-granite, ore-bearing rock. This mineral belt appeared for eight miles, and Ed became quite intrigued. Was this rock formation his mother lode, or another invitation to a dead-end adventure?

Ed traveled to the site, picked up several ore samples and headed to Tucson to record his claim. He also attempted to gain financial backing, yet received numerous turndowns to his request. With money running out, he visited his brother, who worked at a mining camp near Flagstaff, Arizona. His brother Al preferred a steady job in a mining camp and had little desire to search out big strikes. At the camp, Ed met Richard Gird, an expert mining engineer and assayer (one who separates minerals from rock and estimates the valuation). When Gird saw Ed’s ore samples, he also sensed a large opportunity.

The three created a strategic partnership. The three entrepreneurs slipped away from the camp in the middle of the night and headed back to the San Pedro Valley. Ed performed the prospecting, Gird worked at assaying, and Al hunted for food. When they reached the site back on Mule Mountain, the three discovered the hole with the promising ore samples turned out to be a shallow pocket. Al and Gird were ready to dissolve their partnership and depart. Ed insisted that that they keep searching. A few days later, Ed discovered a surprising sight. He did not find his long awaited gold strike. Instead, he found a deep running vein of pure silver.

Ed’s dream of finding the mother lode became a reality, and this silver strike eventually developed into the largest mineral mine in the Old West. Rather than sell the rights to Eastern business interests, the trio secured their own backing and developed the mine themselves (appropriately named Lucky Cuss). This discovery significantly contributed to the development of Arizona’s economy and eventual statehood. In a humorous gesture towards all those in the area who doubted his claim, Ed named the area Tombstone. The town later became even more famous by the legendary actions of Wyatt Earp. The partnership of Ed, Al and Gird remained strong for many years, which proved remarkable since many mining agreements at the time ended up in court or settled by more aggressive means – as in the case of Wyatt.

The story of Ed Schieffelin has many lessons for the modern day entrepreneur. The early years of business development can be especially challenging. Confidence in the business and perseverance are vital to surviving unpredictable circumstances. Ed continued to seek out new markets when other opportunities closed. Even though today’s entrepreneur does not face the physical threats that Ed risked in Huachua Mountains, many other threats exist, such as numerous regulations, price wars, taxation, intense competition and buying behaviors, and complexity, all of which provide enormous obstacles. And, like the Old West, capital shortages and good strategic partners are difficult to find.

Yet, the most significant lesson from Ed’s story is the importance of strategic partnerships in business. When Ed lived like a lone wolf traveling solo among the West’s gold camps, he did not reach his goals. Although he found the silver strike through his own efforts, he would not have been able to develop the mine and produce sizeable wealth without the expertise of Gird and the humble assistance of his brother.

Strategic partnerships are as necessary today as in Old West days. Most business owners are generalists or have a skill in a specific trade. Yet the assistance of an expert with specialty skills in high value areas such as strategic planning, finance, marketing, professional management, etc. can help the entrepreneur achieve their dream and business objectives at a faster and more effective pace while avoiding costly oversights and misdirection. These frequently derail a company or make it impotent in its quest for improved growth, profits, or cash-flow. The alliance of industry knowledge and expert strategic and tactical planning experience is a powerful combination. As Ed experienced, working as a team to leverage diverse skills can produce enormous results!

In his later years, Ed settled in San Francisco, married, traveled extensively in the East and told tales of his romantic days in the Old West. Despite his financial success, Ed found the time to occasionally return to his passion. With his flannel shirt, floppy hat and bacon cooking on a campfire, Ed eagerly searched out new glory holes. True entrepreneurs can’t help but keep pursuing the dreams they love.

So it is with American Business Advisors®. Our passion is to “help businesses grow and produce wealth.” While we, too, have had our share of challenges along the way, we have now met the test of time. Our clients are experiencing significant increases in profits, cash-flow, business value, and quality of life from strategic partnering with us. Please call us to find out about our new, 100% proprietary tool, “The Value Building Matrix™” (see ABA Newsbreak).

The Strategic Edge is published by American Business Advisors, Inc. to provide business and personal improvement information and ideas. All material is presented to provide general and broad information only. The information found in this publication does not constitute business, tax, financial, or legal advice and should not be acted upon without seeking the counsel of professional advisor.