Are You Eager To Take The Warrior’s Leap Of Faith?

It is one thing to study war and another thing to live the warrior’s life.

—Telamon of Arcadia, mercenary of the fifth century B.C.E., as quoted in The War of Art, p. 61.

By virtue of being a business owner, you have chosen to live the “warrior’s life.” Welcome to the club. We warriors can gain courage by gleaning lessons from the best practices of others who have been successful in their fields.

Does this sound too daunting? It does because most of us allow circumstances, fears and doubts distract us from focusing on the prize.

But we don’t have to be mired in the morass of these fears and doubts!  Let’s gain courage to go after the prize by learning from the story of another warrior–Austrian adventurer Felix Baumgartner.

On Oct. 14, 2012, Baumgartner set several world records as he stepped out of a capsule that had ascended to 128,100 feet, suspended by helium balloons. While we might think of his success as his accomplishments that day, in fact he succeeded on the day he chose to start down the path.

Baumgartner’s success began when he chose to create a team to achieve these goals back in 2007. Consider a few of the things he and his team did:

Exiting his capsule is but an echo of that long-ago decision. 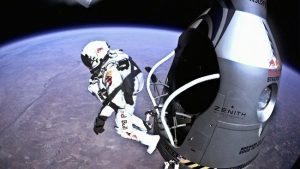 Here are a few of the fears that didn’t materialize:

If like Baumgartner you want to achieve your prize five years from today, what will your first step be? I suggest it begins with the decision to get there!  Follow that up with surrounding yourself with the assistance of others who will help you with the right tools and the support necessary to accomplish your success.  And just as importantly, train yourself to distinguish between what you can control and what you cannot control, then prepare yourself to take a leap of faith.

If you would like some ideas of what you need to do first to become that top 25% company in your industry, consider these potential areas you might commit to working on:

Write to let us know what that first step in journey is for you.