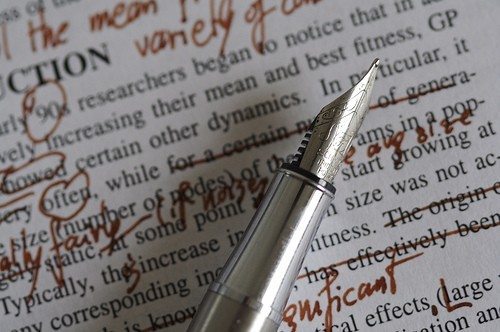 1 Surprising Tip to Kickstart Your Strategic Planning (Part I)

To write is human, to edit is divine.
—Stephen King

Every business owner knows that doing strategic planning this time of year is essential to success in 2016. But, how many of us lack the motivation (or impetus to make the time) to do so? Answer: Many business owners!

As Benjamin Franklin said, “If you fail to plan, you’re planning to fail.”

I don’t know about you, but once I give a passing nod to that, and many other aphorisms, I often mutter agreement under my breath, immediately forget what I heard, stay in my rut, and am even more discouraged from starting. I may ask myself, “But isn’t the key to great strategic planning having brilliant, fresh ideas, a well-thought out plan and precise KPIs?

Well, let’s imagine that your firm could compete for an award like the Academy Award’s Best Picture award for business. Imagine it is possible for you to have a shot to win that award every single year. 100% of the time. This is not hypothetical, but a real possibility.

How I know your firm has a shot at the “Business Academy Award” every year:

If you follow the Academy Awards, you probably pay attention to who wins the Best Picture award. What you may not know is that since 1981—for the last 35 years—every single Best Picture winner was at least nominated for or won Best Editing. Michael Kahn has been nominated the most times—eight—and has won three times. Some of the films he’s edited are Saving Private Ryan, Raiders of the Lost Ark, Schindler’s List, and Lincoln.

So, if you and your team understand what a Best Editing award is, might you, at least, be in the running for that Business Best Picture award? Of course! Might that then give you the motivation to start your strategic planning? I hope so! Who doesn’t want to become a winner?

As 2015 closes, you actually have access to the nearly completed movie of your firm this year. Just look at your monthly and quarterly P&L, Balance Sheet, and the narrative of your KPIs (Key Performance Indicators). This data provides you with the unedited version of 2015. Now, with the vantage point of 20/20 hindsight, you can begin your editing.

Ask yourself, “If I could edit out/revise/cut/kill projects, clients, unproductive initiatives that turned into rabbit trails, etc.

Then, as you do your 2016 strategic planning, take that practice into your planning.

The Best Editing award in business is simple but not easy. You have to be a ruthless editor. A business owner and his team must be editors who decide what they want the business to be. The verb decide comes from a Latin root, cid or cis, means “to cut” or “to kill.”

Even if you do nothing else in your strategic planning other than assessing your 2015 successes and stumbles, you’ll have practiced the art of knowing how to edit the activities that drain your business in 2016.